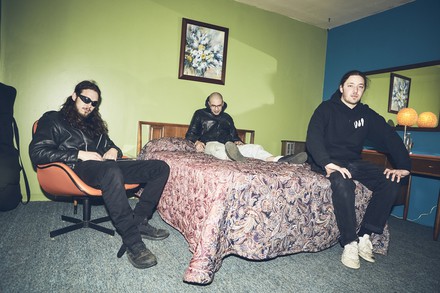 Show Me The Body

A new strain of DIY acts looking to rip apart the status quo has been brewing in New York, and Show Me The Body are largely considered the de facto ringleaders of the movement.

The trio of Julian Cashwan Pratt, Harlan Steed and Noah Cohen-Corbett arrived with debut album Body War in 2016, drawing on the elemental shape of hardcore to lash out at the commodified homogeneity strangling their city. Then and since, Show Me The Body has been a disruptor of the genre’s conventions. Shredding on banjo rather than guitar, vocalist Pratt slips occasionally from howls into rap and poetry, and elements of noise, sludge and electronic music frequently interject the trio’s punk core.

It’s not just in their music that Show Me The Body fight for space to exist and create. Partly inspired by their time spent with youth-run artist collective Letter Racer, Show Me The Body formed their own alliance, Corpus, to unite artists in a community and connect with DIY scenes outside the five boroughs. The resulting mixtape, Corpus I, saw them collaborate with acts like Moor Mother and Princess Nokia.

Their second and most recent album Dog Whistle (2019) takes punk on a whiplash ride between minimalist metal, invocation-ritual industrial and experimentations that don’t quite have a name yet. Unpredictable tracks like opener “Camp Orchestra” with its eerie prog/angular thrash dynamic are just as eye-poppingly fresh as more immediate punk cuts like “Madonna Rocket.” It’s a violent ride, but one paced perfectly for repeat listening.

With Dog Whistle as their most visionary work to date and a live show that has only gotten more brutally euphoric, now is a vital time to encounter Show Me The Body.

INTO Show Me The Body? CHECK THESE OUT: