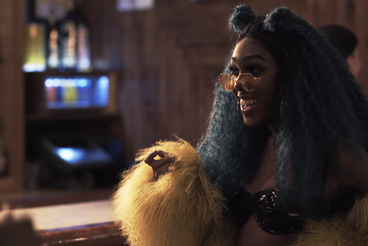 This event will consist of a screening of the pilot episode of the Femme Queen Chronicles webseries, followed by a discussion with Ahya Simone and audience Q&A.

Ahya Simone, who was selected this year by our guest curator Sudan Archives, is a multifaceted artist: an incredible musician and singer, she also directed, co-produced and starred in the 2019 comedic web series, Femme Queen Chronicles, which follows the lives of four Black trans women in Detroit as they navigate love, life, trade, and ki-king. After winning several awards for this work, Simone is currently working with fellow director and trans rights activist Janet Mock to develop it into a TV series. Come hear about her experience entering the world of film and how she has used this opportunity to uplift her community by training Black trans women to work in the creative industry.