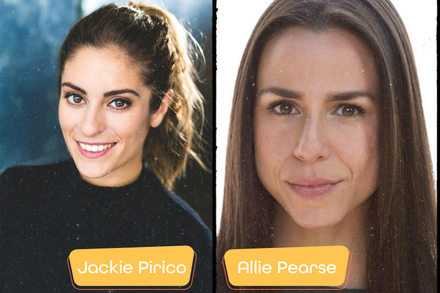 Named by Exclaim! Magazine as a quickly rising force in comedy and an “adept comic scene stealer” by The Hollywood Reporter, Jackie Pirico delights audiences with oddball material and a high-energy style. With multiple television tapings, Jackie's performances can be seen on Just For Laughs: All Access, CTV's The Stand Up Show, CBC's True Dating Stories, and the upcoming second season of CTV's Roast Battles Canada. Catch her live as a member of the prestigious Toronto comedy collective Laugh Sabbath.

Allie Pearse is a standup comedian and writer on the award winning show Letterkenny. She is the winner of Just for Laughs 2021 Standup & Pitch competition, has done TV tapings at the Winnipeg Comedy Festival and JFL’s New Wave of Comedy, and has performed at the Limestone Comedy Festival. Allie has been featured on Sirius XM radio, has recorded for JFL Originals, JFL’s Comedy 101 roast show and OFF-JFL.

Maddy Kelly is a 25-year-old South Indian comedian from Vancouver, BC. As an actress, writer and standup comedian, Maddy seeks to relate to people of all kinds and have fun in every project she takes on. She is best known for CBC’s The New Wave of Comedy, The Standup Show with Jon Dore, CBC’s The Debaters and being the co-host of the Let’s Make A Sci-Fi podcast.

Austin Lonneberg is a comedian from Calgary, Alberta. With witty jokes and unique stories, he has become one of Alberta's top comedians, and has been featured at the YYCOMEDY Festival, Calgary Fringe Festival and on the JFL original album, Mystery Skin Foam.