Beyond the festival's headlining performers at Sled Island's main outdoor venue, Olympic Plaza, including Neko Case, Spiritualized and Rocket From The Crypt, the festival features jaw-dropping line-ups and surprises in unique and intimate settings around every corner. From Rhye’s debut Calgary performance at Central United Church to Burger Records taking over the perfectly-charming Golden Age Club to the two-floor, eight-band dance party capped off with Dan Deacon at the iconic #1 Royal Canadian Legion, there’s a wide-variety of unforgettable show experiences to be had throughout Sled Island 2014.

We realize not everyone is able to commit all 5 days to the festival. As such, there’s individual tickets available for select shows including Olympic Plaza, Flames Central and more. St. Vincent tickets are now sold out online. Visit the Sled Island website for more details on individual show tickets. There’s also a handful of free events during the festival including the East Village Block Party on June 19th, Tubby Dog shows and more.

Details on pass pick up will be coming soon! In the mean time, follow us on Facebook, Twitter, Instagram and consider using the hashtags, #SledIsland, #NobodyRainsOnOurParade to get ready for the most-fun 5-days you’ll have all year! 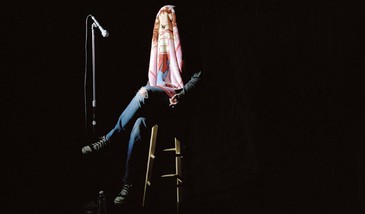 Every year, we aim to present thoughtful programming at Sled Island and our Visual Arts component is no exception! Today, we unveil the extensive roster of diverse works curated by Visual Arts Coordinator, Jodie Rose. There's a clear theme running through this year’s program, combining the Riot Grrrl spirit of Kathleen Hanna and natural engagement with the public. Most of the Visual Arts component at Sled Island will be made accessible for free in the hopes of pushing the visibility of the works further than ever.

Many of this year’s Visual Arts projects are on going beyond the festival dates. Keep up-to-date by checking up on the soon-to-be-unvieled Arts Blog and our social media channels. Most importantly get ready for summer, Calgary. We want to see what you've got this June! 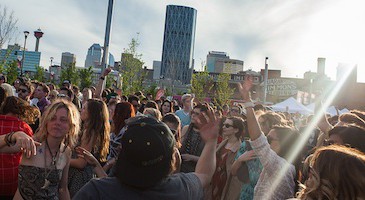 Our big announcement this week is for people who love dancing, sunshine and free things. So, pretty much everybody. The East Village Block Party is back, baby! Come on down at 3pm on Thursday, June 19th and rock your bod to the sounds of LuckyMe bigshots Cashmere Cat and Jacques Greene, Parisian next-big-thing STWO, bedroom-trappin’ Natasha Kmeto, Calgary’s dance ambassadors Smalltown DJs and rising acts Project Pablo, Beach Season and Kline! This fantastic lineup was curated by Calgary’s party experts The Hifi Club.

Whether you’re a vogueing champ or have two left feet, we’ve got you covered. The East Village Block Party will also feature a Big Rock beer garden, Market Collective selling your fave wares , some of Calgary’s best food trucks and more! This event wouldn't be possible with the support of Skullcandy, Red Bull and East Village. Check out the event for full details and listen to the playlist here.

Remember, this is a FREE and all ages event so bring your friends and show ‘em how Sled Island gets down. We’ve got music from 3pm to 10pm and it’s going down rain or shine. See you there!

On Saturday, June 14th, the second annual Green Island Bike Scavenger Hunt kicks off at the Enmax Stage at Prince's Island Park! With last year's event turning out to be a massive success you just know this year will be even bigger. Green Island focuses on keeping green initiatives, environmental awareness and biking culture in Calgary as fun as it should be and this event best exemplifies those values.

From 12pm-5pm, you'll be hunting around the core for a list of finds themed around both Sled Island and Green Island. The first team of 4 to successfully complete the challenge will win 4 Discovery Passes and 4 decked-out bikes courtesy of Big Rock! We've also got a big after-party in the works so RSVP to the event page to keep up to date on that. Sign up your team here or let us know if you need a hand in setting up your squad.

Here's a re-cap of all the crucial details
Date: Saturday, June 14th (Rain or Shine)
Start: Enmax Stage in Prince's Island Park at 12pm
Cost: $10 per person or $40 for pre-formed teams

It is with heaviest of hearts that the Sled Island Music & Arts Festival has to announce that 2014 guest curator Kathleen Hanna’s appearances at Sled Island, including The Julie Ruin’s Calgary debut, have been cancelled. Hanna’s struggle with Lyme Disease, documented in the film The Punk Singer, is ongoing. Unfortunately, she is currently having a relapse which necessitates a difficult 3-month course of treatment. First and foremost, the festival’s thoughts are with Kathleen Hanna, a true artist and inspiration, in this difficult time.

While Hanna’s appearances have been cancelled, her curatorial presence remains felt throughout the 2014 festival. Her thoughtful programming selections across all elements of Sled Island, including musical acts Screaming Females, Hunx And His Punx, Younger Lovers, Mindtroll and Roman Polanski’s Baby and comedy selection Hari Kondabolu are still integral parts of the line-up. Hanna also has curated an art show, In Light Of It, which will still be exhibiting at Contemporary Calgary for the festival. As well, the aforementioned documentary, The Punk Singer, chronicling Hanna’s battle with Lyme Disease and absence from music, will be screened as part of the film programming.

While The Julie Ruin’s much-anticipated set cancellation is indeed a disappointment, Sled Island staff are currently working hard to program a thoughtful, exciting replacement for Hanna’s musical showcase on Saturday, June 21st at the #1 Royal Canadian Legion. In the meantime, refunds will be offered for this concert. If you purchased your ticket online, refunds should be processed automatically within the coming days. If you purchased your ticket at a retail outlet, please return to that outlet starting Monday, May 19th to receive a full refund.

We would like to assure festival-goers that, thanks heavily to Kathleen Hanna’s incredible work, Sled Island 2014 will remain a magical event and we wish her the swiftest of recoveries and a return to Calgary when her healing process allows. There's a brand new party in town and oh, what an arty party it is! Each year, Sled Island puts a thoughtful emphasis on showcasing artwork as an engaging part of our festival. This year marks the inaugural edition of our visual arts fundraiser.

On Friday, May 16th at Contemporary Calgary there will be two missions; to tear the roof off the place and to raise money for visual artists as to contribute more means to execute projects and provide fair compensation for their work.

"Butter" will be a sizzling evening filled with glistening visuals and the fired up dancefloor sounds of Jane Trash, Justin Wadell, Yung Nino and Sled 2014 artist Kline. We'll also be hosting a silent auction for works displayed at the event! Get RSVP'd by shooting an email to rsvp@sledisland.com and hop on over to the event for all the updates. 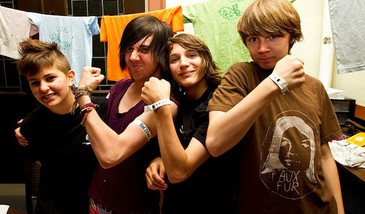 Once again, Sled Island is offering a super-deal All Ages Pass for some of our favourite people; young music lovers! All Ages programming has been a big part of Sled Island from the get-go. From the inaugural edition of the fest in 2007 with Cat Power at Knox United Church right up to last year's awesome performance by The Beets at Tubby Dog, there has and will continue to be exciting options for those under the legal drinking age. An All Ages Pass for $50 grants those under 18 access into tons of options to see headliners or try something new! Our film program is primarily open to All Ages and visual art listings are soon to follow!

The marquee event of Sled Island is always the headliner heavy days at Olympic Plaza. If you were to buy tickets for both days to see Spiritualized, Neko Case, Rocket From The Crypt, Blitzen Trapper and more, you would be spending $80. Duh! An All Ages Pass is a way better deal and gets you into both days at Olympic Plaza guaranteed!

Another exciting option for All Ages programming this year is... wait for it... Touché Amoré! We just confirmed their (all-ages) show is happening on Saturday, June 21st at the Royal Canadian Legion #1 from 2 to 6pm. Tickets available here. You asked and we listened. This show is certain to be packed to the rafters so we encourage you to arrive as soon as doors open.

Putting on a exciting All Ages component can be a labour of love. You can help! We're looking for passionate young music lovers aged 15-17 to help us spread the word. Encourage your friends to come along to Sled Island with you and we'll keep track of referalls. Prizes will be awarded! Visit our All Ages page for more info.

We're also on the lookout for all-ages partners that benefit the All Ages community. If you're interested in partnering with Western Canada's largest indepdendent music and arts festival and have something to offer young music fans, we wanna hear from you! Email us for more details.

Want more? Get a feel for what's available with your pass by listening to our All Ages Playlist on Souncloud.

As always, Sled Island is keeping up with what's happening around Calgary. Hop on over to the Picks page to see what's going on. We now have All Ages options in colour.

That should give you plenty of all-ages info to chew on 'til we reveal the full schedule on May 27th! Stay tuned.