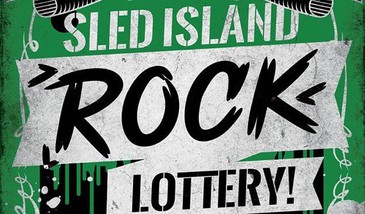 Join us for another round of soon-to-be-legendary Calgary one-offs to find out what do you get when you throw 30 of Calgary's best-loved musicians in a room, have them draw names from a hat to form entirely new bands on the spot, and charge them with the task of writing and performing material that's less than 12 hours old! These bands are only available night-of—after that, you'll have to settle for the rumour mill ("they had two bassists?!") or blurry camera phone photos.

On Sunday, May 17th at The Palomino (long weekend!), Sled Island is doing it again in the name of raising funds for the festival. Tickets will be $10 at the door. 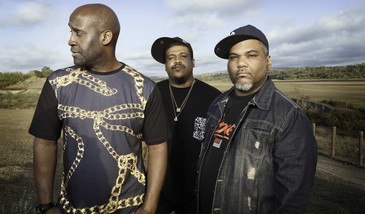 The moment you've been waiting for is finally here! We're so excited to be sharing the full music lineup for Sled Island 2015.

Today we unveil nearly 200 bands from all over the country and beyond. A few very special international headliners have been added, including legendary innovative hip-hop act De La Soul, indie rock deity and past Sled Island performer Yo La Tengo, genre- and gender-defying riot act Mykki Blanco, as well as fuzzed-out garage rocker Colleen Green. These exciting artists join a massive berth of exceptional Candian talent in the form of brooding acts like Maica Mia, Scattered Clouds and Neu Balance, indie rippers like Fountain, Tee-Tahs and Beat Cops, furious and heavy bands like Dead Soft, Shooting Guns and Dead Ranch, hip-hop talent from Tory Lanez, Oseko and Rougies Clique, plus weird pop in the form of Kappa Chow and Quaker Parents.

As always, a massive component of Sled Island is showcasing our hometown talent. Among the many stellar bands included on the lineup, we'd like to mention rising garage-punks The Mandates, club scene and tour circuit favourites 36?, the challenging and rewarding Friesen Waters Duo, doom devils The Weir, flow conscious hip-hop luminary A.Y.E. & The Extroadinary Gentlemen, plus newer act Blü Shorts, made up of members of other awesome local bands.

Sled Island's film program is back as well, and includes docs chronicling music from Montreal to Cambodia, the life and times of punk royalty Danny Fields (in attendance at the festival!), plus a loose Tuareg take on Prince's Purple Rain (starring none other than Sled Island 2015 artist Mdou Moctar). Check out the lineup here.

A limited quantity of individual tickets for select shows will go on sale on Friday, May 8 at 10:00am at SledIsland.com, but you can make the most of your Sled Island experience by choosing a festival pass! It's the only way see all the music, comedy, film and visual art you can handle from June 24 to 28, 2015.

Sled Island at Market Collective: May 1-3 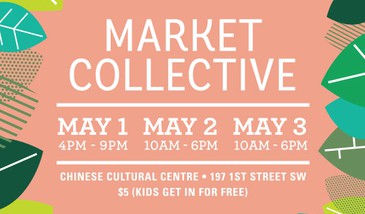 This weekend, Sled Island is hanging out with our pals at Market Collective! We're setting up camp with raffle tickets, merch and more. On top of that, Sled Island staffers will be spinning tunes from some of our festival favourites! 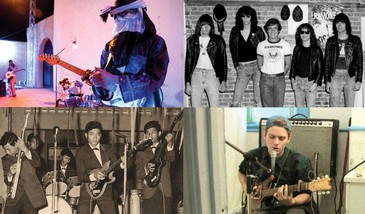 The Sled Island experience is about more than just music. With that in mind, we are proud to announce this year's robust film program! With docs chronicling music from Montreal to Cambodia, the unlikely rock royalty story of a Harvard dropout, and a loose Tuareg take on Prince's Purple Rain (starring none other than Sled Island 2015 artist and Godspeed You! Black Emperor pick Mdou Moctar), this may be Sled Island's most memorable film lineup yet.

Our 2015 program offers a wealth of documentaries, including A City Is An Island, which explores the rich musical talent in Montreal and the relationship that language has to the city's musical output; Danny Says, the unexpected story of a Harvard dropout who went on to work with a veritable who's who of musicians that shaped 20th century music (Danny Fields and filmmaker Brendan Toller in attendance!); and Don't Think I've Forgotten: Cambodia's Lost Rock and Roll, a one-of-a-kind look at a music scene formed out of conflict. As a very special booking, we've tapped Akounak Teggdalit Taha Tazoughai, the first-ever feature-length film with dialogue exclusively in Tuareg. The film, which translates to Rain the Colour of Red with a Little Blue In It, is a gorgeously shot homage to Prince's Purple Rain, starring Mdou Moctar.

Tickets will be available soon, but don't forget—a festival pass is the best way to experience film, music and more at Sled Island!

Sled Island regrets to announce that due to circumstances beyond the festival's control, Cancer Bats will no longer be appearing at Sled Island 2015. Please direct any questions or concerns to info@sledisland.com. 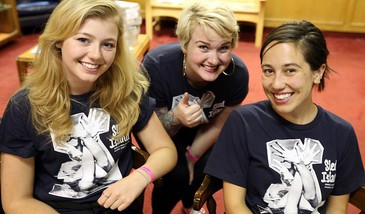 Sled Island happens each year thanks to our hundreds of volunteers!

Want to lend a hand? Applications to volunteer are now open, and we have a wide range of crews you can join before or during the festival. We can't wait to see you all in 2015! 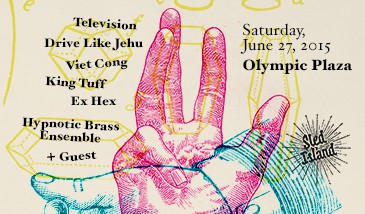 Sled Island is excited to reveal the lineup for our 2015 Olympic Plaza stage!

Best of all, the event is all-ages, free for kids under 12 and fully licensed! Expect an outdoor festival experience like no other.

Tickets are $50 online or $55 at the gate, but remember that festival passes gain entry (and get you access to all access to all Sled Island events, including 250+ bands, film, visual art and comedy)! 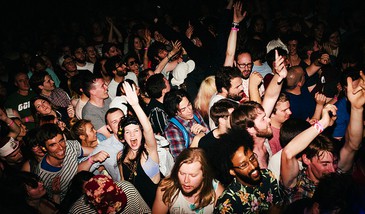 Can't make it to the full festival in June? You're in luck: a limited quantity of individual tickets for select shows will go on sale on Friday, April 17 at 10:00am at SledIsland.com!

Tickets will also be available at Sloth Records (736 17th Ave. SW), Lukes Drug Mart (112 4th Street NE) and Purr Kensington (1220 Kensington Road NW)—check the list below for full ticket information. With Record Store Day happening on Saturday, April 18, we suggest hitting them up on Friday to get a jump on things (or make it part of your Record Store Day plan)!

Remember that a festival pass gets you access to all Sled Island events (250+ bands, film, visual art and comedy), and about 70% of venue capacities are reserved for passholders. We'll be announcing over 150 more artists, including two more headliners, in the weeks to come! 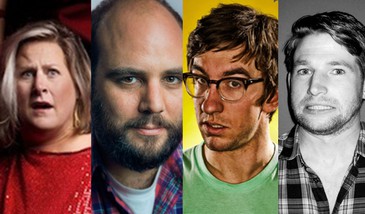 No joke—Sled Island is delighted to announce our featured comedy performers for the 2015 festival!

The New York Times has called our headliner Bridget Everett "an unbridled performer who makes Bette Midler seem like Julie Andrews." Supporting Bridget Everett is Canada's Best Male Comedian of 2014 Chris Locke, Picnicface alum and Mr. D star Mark Little, along with Calgary-born, American Pie Presents: The Naked Mile star Will Weldon (he played High School Student #5)! Not only will they be featured over two nights at the Sled Island Comedy Amphitheatre, but Chris Locke will also be hosting and recording his mega-hit podcast Utopia to Me? for Sled Island attendees.

Tickets will be available soon, but the best way to experience our comedy lineup in all its glory is to buy a festival pass!

Hit refresh at SledIsland.com in the next month for our full comedy lineup, plus film, visual art and even more music to come. 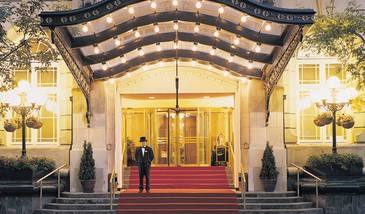 Coming from out of town and looking for a place to stay during the festival? Sled Island works with a number of hotel and accommodations partners to provide artists and attendees with the best possible visitor experiences.

We recommend The Fairmont Palliser, the festival's host hotel, as your first look for Sled Island bookings. They're offering special rates to Sled Island attendees. 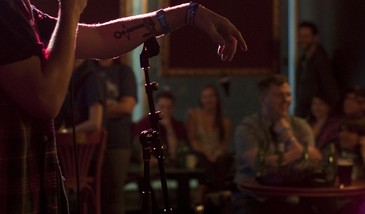 On Tuesday, April 14, we'll be announcing some of this year's spectacular comedy lineup! (UPDATE: Check it out!)

That same night at 7:30pm, come bust a gut in celebration at Local 510 (510 17th Ave. SW) with some of Calgary's and one of Edmonton's finest and funniest, telling jokes big and small and even medium-sized for Sled Island's final pre-festival comedy showcase! 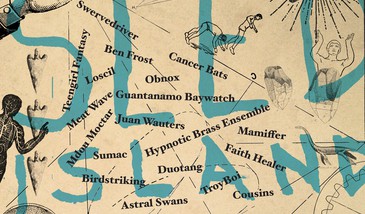 Drum roll, please! Our second wave of 2015 artists is here.

Get your pass today. A limited number of individual tickets for select shows will go on sale April 17.

Can't get enough exciting announcements? Stay tuned—we'll be announcing our Comedy and Film lineups in the coming weeks.