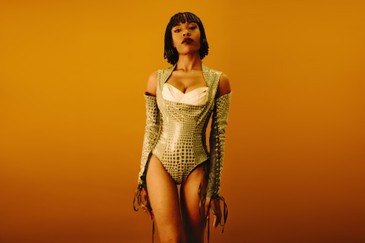 The first major announcement of Sled Island 2020 is upon us. We are thrilled to reveal that electronic and R&B infused violinist/vocalist Sudan Archives will be joining us as guest curator for this year’s festival!

Each year, Sled Island’s guest curator puts their stamp on the festival through special programming choices and with their presence at the event. Sudan Archives’ curatorial selections, to be announced in the coming months, will join over 200 additional bands, comedy, film and visual art projects chosen by the festival in 30 venues across Calgary from June 24 - 28, 2020.

A friendly reminder that Sled Island 2020 Discovery and Discovery Plus Passes are currently 15% off! Regular pass rates go into effect on February 27, 2020.

Also, from now up until mid-May we are offering payment plan options! If you are looking to break up your spending this year, you’ll definitely want to take advantage of this unique offer. For more information visit SledIsland.com/Passes.

She has curated — perhaps unconsciously — pieces of a life spent in church choirs, at fiddle club, digging up her musical ancestry and at electronic-scene fringes into a context wholly new. There’s a spritz of Post-era Björk volatility here, a tinge of Stones Throw Records-forebear J Dilla texture there, but Sudan Archives is best summed up by her ability to do what a curator does best: create an entirely new story in the places in between where no one else has explored. It’s for this reason that we are most excited to welcome her as the guest curator for Sled Island 2020.